Linux kernel is the core of any Linux Operating System. A Linux Distribution consists of a Linux Kernel and other supporting software/tools which are required for file operations, user management, system management, etc. Each of these software/tools performs small tasks of the complete system.

Kernels, in general, are classified on the basis of whether they perform critical system tasks in Kernel Space or User Space. They are classified as Monolithic, Microkernel and Hybrid Kernel. Linux is a Monolithic Kernel. Let's discuss them in little detail to have a better understanding of their working principles.

System Memory consists of RAM (Random Access Memory) cells, which are accessed at extremely high speed but data in them are retained for a very short period of time. RAM holds programs and data that are currently in use by CPU because access time to main storage (Hard drives) is very high. Therefore RAM acts as a high-speed intermediary between system CPU and hard drive. 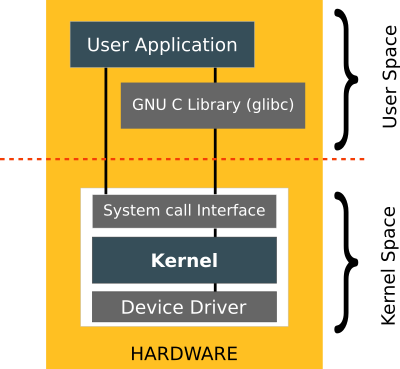 In Userspace, user applications are executed. All user processes run in this space. A process is a running instance of a program. The kernel manages user processes in user space to prevent them from interfering with each other.

GNU C Library (glibc) also resides in User Space. It provides the System Call Interface which provides the mechanism to transition between the user-space application and the Kernel. More on it later.

Kernel space is where core operating system codes are executed. The kernel provides its services using this space.

Linux is a Monolithic Kernel 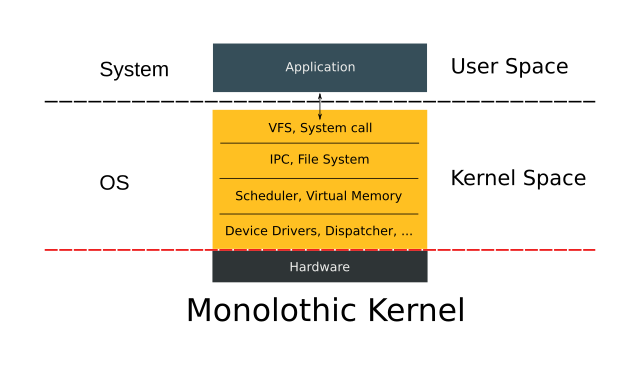 In Linux, however, developers found a way to solve this problem by creating dynamically loadable modules. Modules can be loaded dynamically at runtime. These modules allow easy extension of the operating system's capabilities as per user requirement. A module typically adds functionality to OS for things like devices, file systems, and system calls.

Microkernel whereas only perform critical tasks in kernel space. Pretty much everything else is executed in userspace. For that reason, Microkernel has less memory footprint and is more secure. We will have a discussion about different types of the kernel and their architecture in another article.

Linux kernel is constantly evolving. Thousands of people around the world are contributing to its development daily. You can find information about current and previous releases of the kernel at www.kernel.org.