The Document Object Model(DOM) is an application programming interface for HTML and XML documents. It defines the logical structure of documents and how a document can be accessed and manipulated using it.

The DOM is an object-oriented representation of the web page. Documents are represented in DOM using nodes and objects which facilitates changing its structure, style, and content with a programming language like javascript. All HTML tags and even text inside tags are represented as objects so that they can be easily accessed and modified according to the requirement.

From the beginning, DOM is designed in such a way that it can be used with any programming language. In this series, we will be using Javascript for all operations using DOM.

The HTML Document, when parsed by the browser, is converted into DOM for all further operations. The DOM represents HTML Document as a tree structure of tags as shown below. For example:

You can edit the example document and see the tree structure at this link hixie.ch

Parsing of HTML Document by Browser 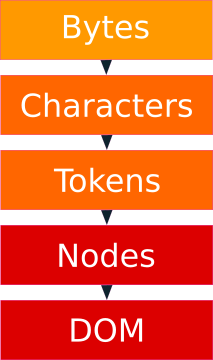 The DOM generated by the above steps is used by the browser for all further processing.

In the next article, we will see DOM tree in detail and how we can use javascript to modify the structure, content, and style of an HTML document.

Doctype and its purpose in HTML Document